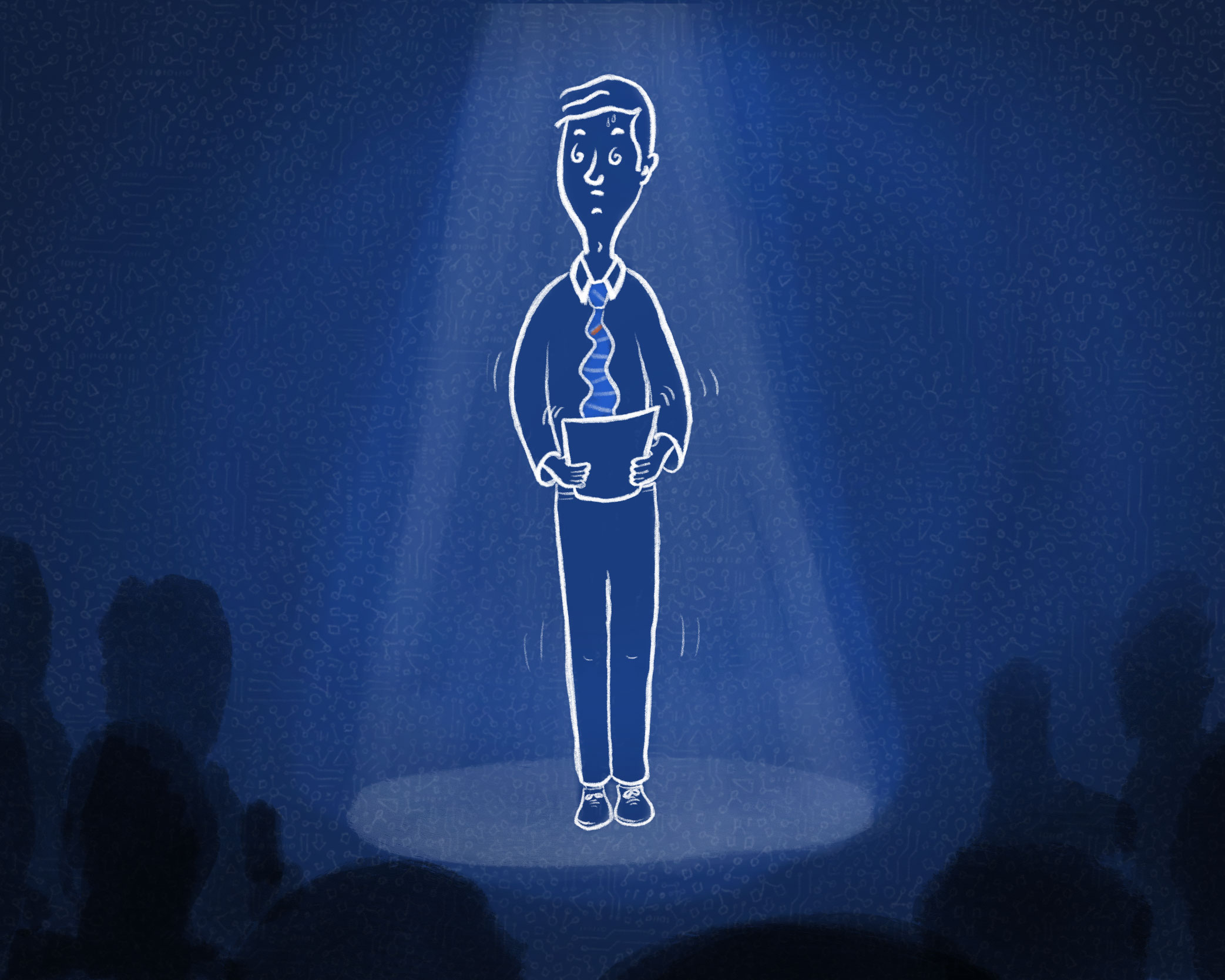 I have been thinking about this moment all last night and the night before. Really, I haven’t slept well in weeks. My heart has started missing beats by the time the moment actually arrives. My stomach has…not butterflies, no I feel genuinely sick. Sweaty palms. Those eyes, those eyes, waiting for me to put it all on the line. What if I flub it? Will I totally screw it up? What if I’m met with laughter?

No one would ever suspect it, but I am actually shy. I’ve lectured to full auditoriums. I’ve been asked to speak at universities and as an expert all over the world, but, to this day, I still feel genuinely sick every time I step up on stage. It can be even worse approaching small groups of people I don’t know.

To say the least, it can be challenging to keep calm. I worry the audience will be bored or think that what I have to say is worthless. Tripping and falling is not a big deal to me. I’ve done it, and the audience normally finds it endearing. It’s funny. My worst fear, though, is that they’ll laugh at what I’m saying.

In Ireland last year, I did a lecture for about 100 students and my lecture just didn’t work. The first 15 minutes were bad and then it went from bad to worse. Some of the students were questioning me, doubting me, and even openly mocking what I was saying. I finished the lecture and stepped away at the end, but I really wanted to run. There are no guarantees that when you speak what you say will end well. You are taking a risk. Even if the content is good, this could be the wrong group for that subject or just the wrong timing for people to be receptive to you. I didn’t have a plan B and I paid for it.

There are tricks, though, that minimize the chances that everything will go wrong.

What are these cool tricks? Simple. I fake it. I pretend. I act like I’m not about to be sick all over the front row. I act like I belong there.

Pretending to belong starts before I even step on a stage.

When I’m lecturing, I try hard to talk to a few people from the audience beforehand. If I can, I set up little mini pre-meetings to find out what the group is thinking about and to give myself a few familiar faces in the crowd. Sometimes, I just walk down and talk to a few people, even if it means not starting on time. There is no rule that says you have to go in cold. I don’t. You don’t need to either.

Knowing these few people gives me a ton of extra confidence as I’m stepping up. Also, having spoken to them means I can often just slightly modify the content of my presentation, potentially by making a couple of off-hand references to them or the things they’ve said, to connect a little better. Everyone likes to hear their own names and the names of people they know. So, I make sure I remember at least a couple of names so I can attribute something smart to them during the lecture. It goes over very well.

Sometimes I realize just before or within the first few minutes of a talk that my content is not right for the group. In these cases, I’ll do my general intro stuff, then turn it into a moderated forum instead of a lecture. This means you always need a “plan B” and you have to be ready to go to it. Fortunately, this doesn’t happen too often, but it is always good to know you can go to it at any time (whether you’ve run out of your plan A material or what you had planned just isn’t working).

Gatherings (like networking events and parties where I don’t know a lot of people) present the same problems for me. I’m not speaking, but I have to manage not to look stupid, sometimes for a couple hours at a time, which presents a similar challenge. Not looking stupid for long periods is really hard for me and, as I approach people, I worry. Just like public speaking.

About 6 years ago, I was at a fundraising event where I knew I was their biggest donor. I was expecting that I was there to be thanked or that I had some role (even if it was to help raise more money), but instead it was a big social thing where everyone knew everyone else, but I didn’t know anyone. I approached groups of people and every group literally turned their backs on me with the clear intent to exclude. I felt like a pinball, bouncing around the room, but not coming to rest anywhere. After about 45 minutes of this torture, I just left.

I became determined to never let that happen again. So, I taught myself a few tricks for gatherings.

First, I now remind myself that almost everyone is insecure. Some of the people may know each other, but most people are even more nervous and self-conscious than I am. I try to approach people I think could use someone to talk to. Sure, sometimes I end up with someone dull, but often the quietest people are not only the most interesting, but are also great listeners. I’ve found that approaching the popular people in the room usually means I will have a superficial conversation, be sidelined, or get abruptly dropped when someone potentially more appealing comes along. In the worst case, these people may even be the bully in the room (there always is one).

Second, sitting still is deadly. At a gathering, you’ll have three friends: the refreshments, the bathrooms, and the person who invited you. You can’t hang out with any of them for too long or you’ll come off as an unsociable brigand, but as you rotate around them once or twice, seek out your targets. Having a few targets is smart. Think about you’re approach — “Hi, my name is…” usually works pretty well as an opener, but having a couple of good open-ended questions lined up (“What kind of work to you do?” or “Do you like to travel?”) will hopefully get them talking, so you don’t have to. Get people talking — they will like you more.

Finally, I always try to have a funny story. If it gets quiet and it is up to me to carry the conversation, I want to have something. It has to be something I’ve told before, but not so many times that I’m bored with it. A good story with a surprise at the end is always good.

So, even if your heart is pumping out of your chest and you feel like throwing up or running away, stay calm. Use tricks to calm your mind and don’t let the room intimidate you.

For more advice on improving your public speaking skills as a manager, request a demo at www.managelabs.com